Getting Started with OpenRISC

From FPGA to Linux Shell

OpenRISC is a CPU architecture developed by the OpenCores community. OR1200 is an open-source Verilog implementation of the CPU core, and ORPSoC (OpenRISC Reference Platform System on Chip) combines the OR1200 CPU with a set of peripherals.

The system-on-chip can now synthesized on FPGAs that are now within reach of the hobbyist. This guide documents how to set up an OpenRISC build environment, load ORPSoC on an FPGA, and run Linux on the soft processor.

You'll also need a Linux workstation with about 15GB of free hard drive space and a fast internet connection. These instructions were developed on Debian, and updated and tested on Ubuntu 12.04. Other distributions may vary.

To use OpenRISC on physical hardware rather than just in simulation, you'll need an FPGA. This guide is built around Terasic's DE0 Nano. See the section below for more information.

This guide is built around Terasic's DE0 Nano. It's a FPGA development board fairly well sized for supporting OpenRISC, at a price below $100 USD. DigiKey seems to be the best option for purchasing it in the United States. Terasic sells it directly and advertises a lower price, but will gouge you on shipping and money transfer fees.

Note that the DE0 Nano does not have a lot of peripherals on board, which is fine if you are comfortable adding on your own circuitry for things like VGA, as explained in a (currently unwritten) later chapter. The minimal configuration of ORPSoC with a serial port takes about half of the board's resources. Here's the Altera fitter report.

OpenCores - The parent site for OpenRISC and the surrounding modules that form ORPSoC. Note that opencores.org contains two sets of pages. There are the wiki pages and the older "project" pages. Some of the information on the project pages is out of date.

git.openrisc.net hosts the source code for many OpenRISC subprojects. OpenRISC source code is scattered in a variety of other locations, including GitHub and OpenCores SVN.

Another great resource is the #opencores channel on freenode IRC. Special thanks to stekern (Stefan Kristiansson) for his troubleshooting help.

Another option is ORBuild, which seemed too heavyweight for the purposes of this guide, and doesn't include all of the tools.

To download and compile an OpenRISC toolchain and utilities:

This will take a long time to download and build.

Run source openrisc_env.sh to set up your shell for OpenRISC development

The previous step already pulled down a copy of the Linux kernel source.

Configure the kernel and compile it

The kernel tree includes a pre-compiled copy of busybox in arch/openrisc/support that will be automatically used as an initial ramdisk.

You can test out the kernel using or1ksim. Edit the file arch/openrisc/or1ksim.cfg, and change channel = "tcp:10084" to channel = "xterm:" around line 642 to see the output in a new terminal rather than using telnet.

to start the simulation. You'll see Linux boot, and you'll have a linux shell in the xterm. 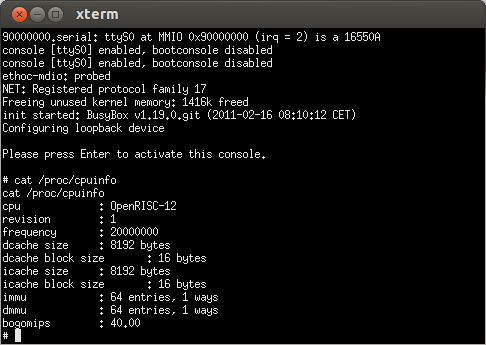 To synthesize Verilog into a bitfile to load onto the FPGA, you'll need Altera's Quartus II. Download the 3GB installer from Altera. (If the link is broken, you'll need to go to altera.com and find the download for Quartus Free Edition for Linux. They'll make you enter an email address, but it doesn't have to be valid.)

Follow the install wizard that appears after a few seconds.

If you're on a 64-bit platform, you need to make a symlink for it to be able to program the DE0 Nano's FPGA:

Get a copy of the ORPSoC RTL:

This includes the OpenRISC core, all the other peripherals such as the USART, VGA controller, etc., and the toplevel modules to combine them into a system on chip and integrate them with the hardware on the DE0 Nano board.

The board-specific parts for the DE0 Nano are in the boards/altera/de0_nano directory.

The default configuration puts the serial port on some inconvenient pins on the bottom header. Luckily, this being a soft processor, we can change that. Edit syn/quartus/tcl/UART0_pin_assignments.tcl to change the pins.

The diff above places the serial port on the far end of the GPIO-0 header:

If you've already run the makefile, rm boards/altera/de0_nano/syn/quartus/run/orpsoc.tcl to ensure it is regenerated with the updated pinout.

Then, run the synthesis

You'll end up with a .sof file containing the FPGA bitstream, and several report files.

The FPGA ORPSoC has a slightly different configuration than the simulator, which we need to tell the kernel about. Linux represents hardware as a device tree in a .dts file. I've created a device tree for the DE0 Nano. Put it in arch/openrisc/boot/dts/de0_nano.dts.

Compared to the or1ksim.dts, it sets the processor and UART clock speed to the correct 50MHz, and removes hardware like the ethernet controller that aren't present.

Tell the kernel to use it by running make menuconfig. Select Processor type and Features -> Builtin DTB and type de0_nano. Exit and save the configuration. Re-build with

You'll communicate with the OS running on the DE0 Nano with a serial cable. One of the popular choices is the Nokia CA-42 cable based on the PL2303 (clones are available for $2 on eBay), or various options based on chips from FTDI. Connect the cable with the pinout configured above.

Putting it all together

You'll use JTAG to load the software onto the board and debug it, and a serial port to communicate with the running software. The JTAG adapter built into the DE0 Nano used for programming the FPGA can double as JTAG to the OpenRISC core.

I opened several terminal tabs to run the commands in parallel:

In orpsoc/boards/altera/de0_nano/syn/quartus/run, to load the ORPSoC bitstream onto the FPGA, run

You now have an OpenRISC system!

Open a serial terminal so you'll be ready to interact with it:

(press ctrl-a \ to quit screen when you're done.)

In another terminal, start the openOCD server:

And finally, in a 4th terminal, use GDB in linux/ to load and start the kernel image:

Type load to load the image into the FPGA's memory. This will take a minute. When it finishes, type jump *0x100 to jump into the kernel. Switch back to the screen window, and you'll hopefully see Linux booting up.